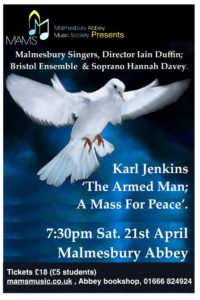 Saturday 21st April 2018 at 7.30pm
at Malmesbury Abbey
accompanied by the Bristol Ensemble. 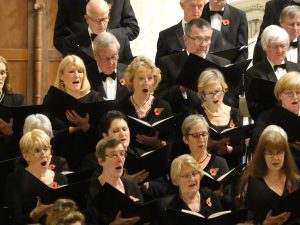 A dramatic and moving concert of The Armed Man, a Mass by popular composer Karl Jenkins, took place On Saturday 21st April in Malmesbury Abbey, to mark the centenary of the end of the First World War.

Malmesbury Singers performed to a sell-out audience who packed the Abbey for an electric night of music.  A thunderstorm raging outside the ancient building added to the musical atmosphere of battle created inside by the percussion and instrumentalists of The Bristol Ensemble orchestra.

The choir was also supported by the rare talent of nationally renowned soprano soloist Hannah Davey.  Conductor Iain Duffin said: “I first heard Hannah a couple of years ago and was struck by the lightness and purity of her voice, which I thought would suit the Armed Man very well.  I was delighted she agreed to sing with us.”

The music was interspersed with readings of war poems by local actors Jacqueline Tong, Nikki Kelly and Anthony Smee.

Iain Duffin explained the reason for combining poetry with this music: “The Mass is entitled ‘A Mass for Peace’.  Much of our famous war poetry dwells on the negative side of war, the suffering, the futility and the horror of it. I thought that to bring the two ideas together was an excellent fit.”

A combination which the audience appreciated: Richard Venn in the audience remarked  “It’s one of the most amazing concerts I have ever been privileged to attend.  An emotional roller-coaster.”

Asked what plans he had for the future, Iain Duffin said: “My ambition for the choir is to continue performing stimulating classical choral works, with professional soloists and orchestras. Specifically for Autumn 2018 we are looking for more sopranos and we would love to hear from anyone interested in joining our friendly choir.”

For more information please contact us using the tab above!